Steve Rudolph has had an inspiring career in his 50+ years of professional music making. Jazz Improv magazine states, “Rudolph is a savvy, swinging, glimmering heavyweight...simply outstanding.” He was awarded two Jazz Composition Fellowships from the PA Council on the Arts. With fourteen acclaimed CDs as a leader, he has served as producer, arranger and performer on many recordings including sessions with Johnny Coles, Bill Goodwin, Ali Ryerson, Matt Wilson, Drew Gress, Cal Collins, Jonathan Raggonese, Phil Haynes, Roger Humphries, Dwayne Dolphin, JD Walter and Vinny Valentino. His vast experience encompasses concert performances with many jazz masters including Louie Bellson, Clark Terry, Terry Gibbs, Al Grey, and the Mills Brothers. Steve has toured throughout the U.S., India, Europe, Canada, Russia and the Caribbean.  At Home he is the leader of many ensembles including the River City Big Band.  HIs latest recording features him as pianist in the acoustic trio Day Dream with Phil Haynes and Drew Gress. Currently a Yamaha Keyboard Artist, he is in demand as a clinician and performer.

Steve was born in Evansville and grew up near Boonville, Indiana. He studied trumpet and composition under scholarship at Butler University in Indianapolis where he discovered an inspiring jazz community in the late 60's. He switched his main instrumental focus to the piano at age 22 and was hired by Buddy Morrow to perform with the Tommy Dorsey Orchestra in 1977. Since moving to Harrisburg in 1978 to perform with his jazz trio and guest artists six nights a week at the Holiday Inn Town, he has been largely responsible for the growth and development of the thriving jazz scene in Central PA. His devotion to the art of jazz inspired him to found the Central PA Friends of Jazz, now in its 40th successful year of monthly concerts, youth band, jazz camp, and annual Central PA Jazz Festival.  He served as the Executive Director of CPFJ from 2012 to 2019.  Steve was the recipient of the 2002 Harrisburg Arts Award for dedication to the arts and community service and has received two Composition Fellowships from the PA Council on the Arts . Steve is well known in Central PA for his 22 year long job as house pianist for the jazz programming at the Hilton Harrisburg.  His detailed recording and touring information may be found at www.steverudolph.com. 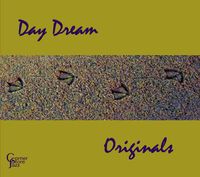 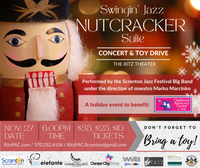 Ring in the holiday season with a jazzy spin and adaptation on the traditional music from The Nutcracker Suite by Tchaikovsky and arranged by Shorty Rogers. Billy Stayhorn and Duke Ellington. Featuring the Scranton Jazz Festival Big Band, as well as the SJF Student Ensemble from the PA Jazz Institute. This event benefits the Children’s Advocacy Center (CAC) so we are collecting NEW, UNWRAPPED TOYS to gift to children in our region this holiday season.

"The trip of a lifetime!"